Until a few months ago, people talked about it like some trend which appeared among many others. Suddenly, also as a consequence of the pandemic, it became the flipping point for many companies. Reality is, remote working (or working from home, or smart working) was a real opportunity already in the past (in Vitesse, we chose it in 2011) and even more so now. Still, some cautions must be taken into account when making the leap.

Moving the laptop from the office table to the living room is enough to "work from home," but it might not be enough to do it productively. If this unique (and hopefully unrepeatable) situation has cracked the myth of the need for physical presence in the same workplace, at the same time revolutionizing such a critical routine requires preparation. On the mindset side, but also the technological one.

Here is where software, the so-called tools, come into play, allowing teams to remotely restructure business processes (sometimes improving them), and enhance productive and concrete collaboration. Sounds straightforward, doesn't it?

During almost ten years of smart working at Vitesse, we have experimented dozens of tools, always attempting to perfect our way of collaborating, better team participation, and generally to "work" better. Some experiments were successful, others less so.

In this blog, we want to share five successful experiments: five must-have tools that suit our way of working in our field - communication. Here is our toolbox:

- SLACK: Perhaps the most famous tool for corporate collaboration, allowing employees to send instant messages within the workgroup inside the platform. On Slack, we exchange documents, information, and feedback, all organized by channels: in our case, we chose to create one for each project, plus some extra ones for specific areas. Within Slack, each member of the working group can subscribe to the various channels and manage the methods and timing of notifications. Slack also integrates with several popular applications, such as Google Calendar, Dropbox, and several others.

We like Slack because it provides a shared history of what's going on with a project, and allows us to use instant messaging in a direct and "professional" context, far from the noise of Whatsapp and Facebook Messenger. Those who want an alternative can turn to Discord, or to Microsoft Teams - a software that more than any other is introducing itself today as a direct competitor of Slack.

- SKYPE: Let's talk about this video calling system, which is perhaps the best known in the world, arguably because it was the first to stand out before many competitors - which are quite a lot today: Zoom, Google Meet and Microsoft Teams above all.

Reality is, all these systems manage to work well, and many of them have superior functionality compared to Skype, either for the possibility of creating webinars, interacting with a higher number of users, taking advantage of more efficient scheduling methods. We know these tools because we use them often as well.

However, for our internal meetings, we choose Skype for an overall simple reason: it is free and has no defined time limit. For small teams like ours, Skype fulfills the need to look at each other at least once a day, with no fancy tools but without having to look at the timer running out. At the time of writing, Google Meet also offers the same advantage, but it seems it won't remain free for much longer.

- DROPBOX: You cannot think of working remotely without a functional and organized cloud system. Today, a cloud archive is a reality for most companies with traditional offices, but a decade ago, it wasn't so widespread. That also happened to us, as soon as we decided to shift to working as a remote team, we equipped ourselves with a first cloud computing system, but it was too cumbersome, so we ended up using it too little. It took a couple of broken hard drives and several punches on the table to decide to change: both the method and the cloud system. We chose Dropbox, and it worked.

Dropbox isn't certainly the only cloud storage system on the market (Google Drive, Microsoft OneDrive, and more). Nevertheless, in recent years it has always provided us with the essential tools to collaborate, internally and externally, with widely adequate sharing space and superior ease of management. Also, stiff competition often generates a wealth of new functions and features - which is great for users.

For a corporate structure, however small, it is essential to choose the business version, which, compared to the base one, allows the management of the administrative controls of the team members and offers total protection of shared data against forced access by third parties.

Thus, it is essential to choose a social channel management tool that is not only functional and effective but also suitable for internal working methods, with all the functions necessary to become an assistant rather than a boundary.

After long and tiring scouting, we have chosen Kontentino, above all, for its practical collaboration features. With Kontentino, it is possible - and easy - to manage and check editorial plans at a glance, follow internal and external approval processes, and create useful reports for customers.

One possible alternative is the world-famous Hootsuite.

- MIRO: A whiteboard to work in real-time with your team. Miro is a great friend of the creative processes in which the whole group participates, the typical situations that most suffer from not sharing a physical space.

Agile and easy to understand, Miro offers dozens of pre-set templates to work on (mind maps, flowcharts and much more), but also allows operating flexibly using virtual post-it just like you would on a physical whiteboard. In short, the best way to develop an idea with the contribution of the whole team: Miro is the solution for brainstorming, co-creation, sprint design, and more.

The best way to understand how to use it is to start using it. The free plan is quite limited, but for those who make substantial use of methodologies that require the participation of several people in the planning and designing phase - such as Growth Hacking - Miro is undoubtedly a good investment.

Of course, the one above is just a glance: like every remote team, we use way more than five software to collaborate, many of which without even thinking. But processes and habits require time to change, as well as different experiments to understand what works for each specific structure: if you want to start experimenting, try by getting off here!

6 reasons why Smart Working is THE way (even after Coronavirus) 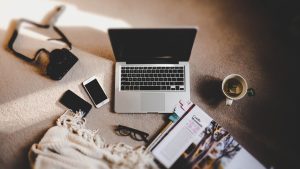